The spirits are alive…

A few days ago we were invited by our host, Agung, to attend a special Hindu ceremony at his temple, a ceremony for the Gods that happens only once a year.  He and his family have been preparing for this ceremony for weeks, and one of the first things he said to us when he picked us up from the airport was, “You come on 4 of June to my temple for special ceremony?”

We were like, “Sure,” not really understanding the significance of this invitation.

Even now, I’m not sure I fully understand what it was that we were a part of that morning, but I know it was special.  To me, Bali is the most spiritual place on earth.  To fully grasp what Hinduism means to most Balinese, you almost have to live it, because, I believe, it’s more than a religion of scriptures to them.  As a mere observer, I see their  Hinduism interwoven in all aspects of their life…art, music, dance, family and rituals.  Although Hindu ceremonies seem to happen every day in Bali, this one was a once-in-a-lifetime opportunity, at least for us.

The day began with a curious delivery of a pile of folded cloth to our bungalow.  We determined that they were the special clothing we were to wear to enter the temple, but how on earth to assemble ourselves??  Fortunately, we found Ayu, our house caretaker, to show us exactly how to put on the clothing.  As you can imagine, it took a bit of bribery and a few white lies (these are special Balinese princess clothes!) to get Kai to consent to being wrapped in a sarong and a lacy long-sleeved top on a hot day.  But when all was said and done, we were off, decked out in ceremonial garb, side-saddle on motorbikes to the temple to join Agung and his family. 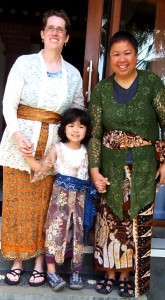 Temples in Bali are cement walled-in structures with open-air patios and shrines inside, and it seems like there’s one on every corner.  During festivals and ceremonies, they are transformed into beautiful, colorful, elaborately decorated offerings to the Gods.  Prior to a ceremony, you’ll see women congregating around a temple, making hundreds of offerings and decorations from hand, from palm leaves, flowers, fruit…

When we got to the temple, Agung led us to sit down on the cement floor to wait with everyone for the priests to process into the temple.  There were dance performances by young children to offer thanks to the Gods.  Then, the prayers were 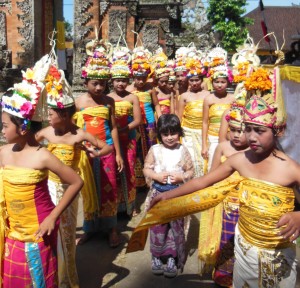 led by the priests, which was most fascinating to watch.  Each person had a small tray of offerings in front of them.  Incense was passed around to place on their trays.  Then, as the priest called out, each person would take something from their tray, like a flower, and hold it up with clasped hands to pray.  When they were done praying, they put the flower in their hair.  This ‘dance with the Gods’ was repeated until all of the offerings on their tray were offered up.  The morning was brimming with ritual.  More than an hour had passed on the hard cement floor, and although my back had turned into a mess of spasms, I could somehow transcend above the pain in a room saturated with prayer.  I eventually took our restless daughter home for lunch while Megan stayed for the rest of 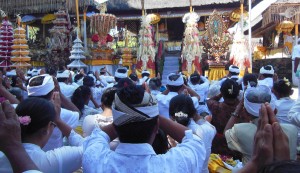 the ceremony, almost two hours more.  Megan came home, glowing, blessed by holy water, with rice pieces pasted to her forehead.  Being the mature 49 year-old that I am, I tried to take them off because they distracted me while she was telling me about the ceremony, but she calmly stated, “Leave them.  They’re significant.”

That was it.  It was a most significant day.

This entry was posted in Bali. Bookmark the permalink.

One Response to The spirits are alive…